Scarlet Huntress: Reckoning is the latest comic from creators Sean and Steph Forney. It continues the adventures of werewolf killing machine, Scarlet.

This new comic book is the culmination of Scarlet’s first story arc – seeking answers and revenge for her mother’s murder. Our favorite werewolf huntress finds and fights her biggest adversary… and brings a reckoning. She finally faces Malakov to get revenge for her mother’s murder. It’s going to take a team to finally beat him along with some magical help from the secret amulet.

Who will survive? Will Malakov finally answer for his crimes? Will the truth be revealed?

Scarlet is a modern-day descendent of little red riding hood hunting werewolves and seeking revenge for her mother’s murder while coming into her own as she takes up the mantle of the Scarlet Huntress.

Reckoning is an over-sized comic book at 48 pages of story and amazing full color art by Sean Forney. This is the 5th book in the SH series + 2 companion books (7 books total). We have a variety of exclusive covers, new collector’s boxes, and lots of new art!

Commercial artwork includes Upper Deck, Tire Discounters, Red Roof Inn, Cut the Rope (Titan Publishing), Lego, Inc., My Adventures with Spider-Man (Marvel/Identity Direct), and the Spin Master’s Bakugan toy line. Sean also hosts weekly live-drawing sessions through his YouTube channel and appears on podcasts and other live streams. His work is on display as part of the FCCFA’s Convention Center permanent collection and has been made into a mural in Columbus, Ohio as well.

Stephanie Forney is the co-creator of Scarlet Huntress with husband Sean. Steph has written most of the Scarlet Huntress series except for a few short stories, along with all the editing, flatting, lettering, and formatting so far. Steph is a visual arts teacher who works at a high school in central Ohio, teaching animation and graphic design. She is also a fine artist working on children’s books, gallery pieces, commissions, and managing Sean Forney Illustration when not teaching, baking, or raising their pup Indy.

Who will love Scarlet Huntress: Reckoning?

Scarlet Huntress is deeply rooted in supernatural monster hunting. If you enjoy the likes of Supernatural, Scooby Doo, Buffy, Blade, Teen Wolf, Monster Squad, or Charmed then you’ll instantly fall in love with this series.

The new Scarlet Huntress includes some very limited and exclusive variant covers for all the collectors out there. This campaign is also introducing new box sets and all new art on covers for issues #1-4. There are a few surprises along the way including exciting new stretch goals and add-ons for prints, bookmarks, buttons, and more incentive rewards.

How can I support Scarlet Huntress?

Head on over to Kickstarter by clicking THIS LINK.
There are many affordable tiers on offer starting at just $8. 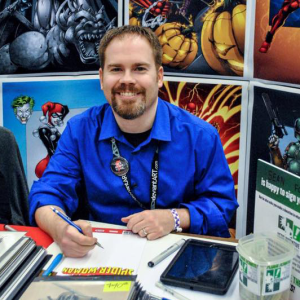