Sweet Heart – The Hunger is real

Sweet Heart is an upcoming series from Action Lab that blends the ever present fear and impending doom from something like “It Follows” with creatures that could absolutely fit with the host of terrifying monsters of the SCP Foundation.

This issue follows the life of a boy named Ben as he makes contact with a “Stringer” one of the two types of these horrific monsters that seem to imprint on their victim before killing and eating them. One interesting aspect of this story is that they don’t just outright kill their victims, but seem to wait for the perfect opportunity to do so, adding on to the fear.

Writer, Dillon Gilbertson, plots this book as a slow burn as we get the story from a third person perspective as we follow Ben’s life from his first encounter with the Stringer up to his adult life while still dealing with the creature. One thing that he stresses is the feeling of going from fear to apathy as Ben is given a tonic to ward away the being and it just becomes routine.

An Otherworldly Race of Monsters

As the story unfolds, we get a wider view of this world as it exists and find that these Stringers and “Bruisers,” the other race of monsters, are just about a normal problem in this world. The tonic that Ben is given is something of a solution to the problem, though it is not explained how it was developed or when these monsters came to be.

Normally, that would be a problem for me, but the mystery helps to keep readers intrigued. These creatures are just such a normal part of everyday life that people have conversations about them over casual breakfast!

Artist, Francesco Iaquinta, and colorist, Marco Pagnotta, really bring out the terror through their visceral lines and colors. The initial few pages start building the terror as we only see small silhouettes of the creatures before they become more prominent and Ben becomes more aware of their presence.

When we do finally get to see one of the Stringers, it’s sudden  and terrifying because Iaquinta gives the panel a feeling of overwhelming dread because it seems like the creature is seconds from killing Ben. Pagnotta colors the scene as being an ominous afternoon, but colors Ben as a black silhouette as to give more focus to the Stringer.

From then on, things just get even more terrifying as the creature appears in the backgrounds, just showing limbs in a closet, hands appearing from the darkness and tongues just getting closer and closer. One of the best shots in the book has to be when ben is in the hospital after his first encounter and the Stringer is at the foot of his bed.

It looks absolutely mesmerizing as Pagnotta gives it bright red eyes and colors it and the page in a hazy blue hue as Iaquinta draws it in an inhuman pose. It’s the kind of thing that’s liable to cause a heart attack and the pair do an excellent job of portraying the danger of the creature as it’s unknown where it came from or how long it’s been there.

Of course, Saida Temofonte brings it all together with her phenomenal lettering. The narrator’s bubbles are a noticeable light purple that still blend in to every panel perfectly and her regular speech bubbles are excellently sized and easily compliment the art by either filling the empty space or being small enough to sell the terror.

Her sound effects are some of the best I have ever seen from light “TAPs” to absolutely gut wrenching “sssCHOMP” sounds as one man has his entire upper half ripped and eaten by a Bruiser. The creepiest aspect of this has to be the Stringer’s letters that stretch across any page it speaks on with a scratchy and unhinged font. 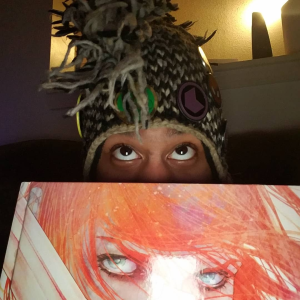 The Artist formerly known as Tyson Yurai fancies himself a fan of capes, dumb 90s trash and great horrors/thrillers!