When the proprietor of this website proposed that I produce a list of fifteen creatively inspirational tracks, I knew he’d underestimated my dedication to anal-retentively curated mixtapery.

How’s about thirty-six painstakingly sequenced bangers, compiled as a double album recorded on two C-60 cassettes? Let’s really get fucken wild, crank it all up to double hockey-sticks and explore the outer suburbs of balls-to-the-wall extravagance?

I’m pleased then, to present to you the following rock and roll odyssey in four sides.
Let’s call it The Lunatic’s Manifesto (Volume One).

Pour yourself something with the bouquet of cheap paint thinner, have a drag on some biz that’d potentially blind you and smash that play button. 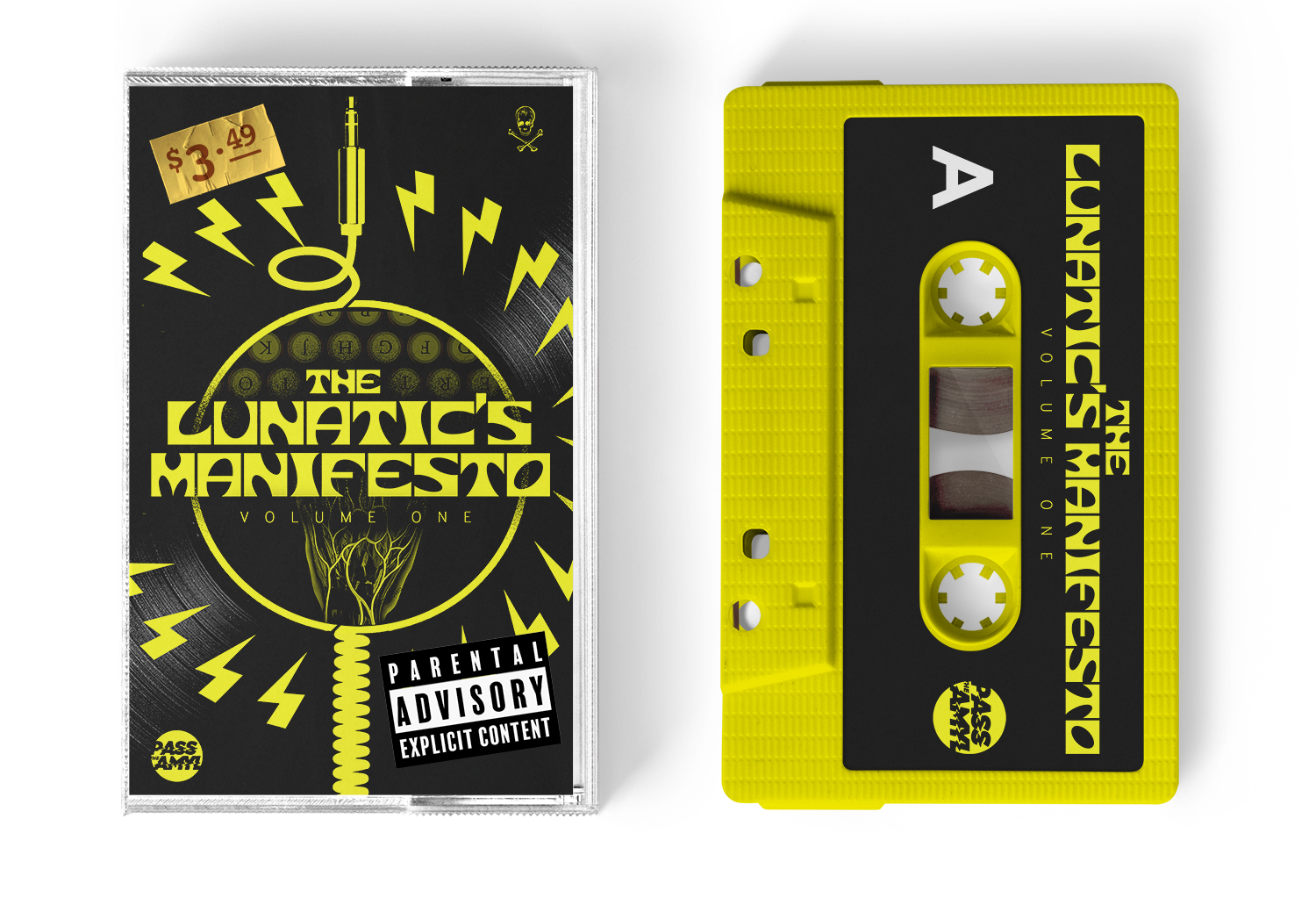 This one’s off the debut concept album from the bloke behind Metalocalypse, the first of two Brendons on this tape. What are the odds? I’m firmly of the belief that this album should be deployed alongside an epic Jack Kirby style battle between cosmic titans, and that’s exactly what it inspired in my upcoming series of novellas, Home Brewed, Vampire Bullets.

I did you a favour and linked you to the live version, not the maxed-out trigger warning album version (that cover, yikes). This is Australian proto-metal from the extremely dodgy end of town, circa 1974. I love the sleaze, I love that it’s Aussies putting their spin on the genre and I love that you’d be cancelled for life if you did half the shit these lads pulled back in the day.

Angry Anderson: appalling politics, fucking great, rabble-rousing anthems for the mean streets of late ‘70s Sydney. You wouldn’t have the Gunners without the Tatts, and I suspect Angry, Pete and the lads would have kicked Axl and the lads’ arses up and down King Street without batting a tear-drop tatted eyelid.

Encountered this one at the end of Preacher, season one – still on the fence about that show – and it immediately ear-wormed itself and became a bit of a personal theme song for 2016. Here’s a piece I wrote about it. Scrappy paeans to being a self-sabotaging wastrel? Fits the bill, for sure.

Cutting a direct line from Suzi Quatro via The Runaways and ABBA, these guys are the foot-tapping Scandy throwback rockers you’re looking for. Having had a life-long fascination with leather catsuits and extremely formidable female lead singers, this one ticks all the boxes. What’s not to be inspired by?

This one’s a heady gonzo speedball, a musical version of my kitchen approach to, well, pretty much anything.

The gateway drug to these guys was a cover of another one of their songs on an early Desert Sessions album. I simply just find burnt out old (young at the time) blues rockers a barrel load of fun to write about. Also: corker of a tune. More people need to know about it – you’re welcome!

You want swagger in spades? Holy shit, did Diamond Dave have a sock-jammed-down-the-strides proposition for you. This live version, parping blues harp solo and all, set me on an early path of pursuing completely over the top rock and roll ridiculousness in all its forms. Speaking of:

Track 9 – Judas Priest – Heading Out To The Highway

You would not believe how this one landed for a sheltered, desert-bred lad who’d just bought his first double-CD Best-Of collection in the mid-nineties. Fuck! We did lots of heading out on various highways! Probably with a bit to lose, but sure. This was fist-pumping gear about hitting the road and chasing those dreams – a perfectly timed discovery for a kid whose vast geographic horizons felt like a cell.

Was working for a relatively right-on religious organisation when this came out, so it was deeply satisfying to give the old Beelzebub-baiting gear a solid nudge on the headphones. Ghost’s commitment to absurdity, theatricality and narrative were a Revelation (let’s lean into the Biblical eh?) – they forsook earnestness for camp, canny pastiche, which was just the injection of virtuosic bluster I’d been after.

What’s more terrifying than the Climate Crisis? Not fucken much. The embarrassingly prolific King Gizzard delivered Infest The Rats’ Nest in 2019, envisaging a world ravaged by the dual horrors of pandemic and heating while the upper tiers of humanity cash out and fuck off to Mars. Three years later and yep, that’s not exactly a wild concept to contend with. We dig art that rubs your nose in it.

These African-American dudes wrote a classic proto-punk album in their late teens, full of belters, and it was finally discovered and hit thanks to a fairly revered doco forty-odd years later. Good shit, right? Makes you feel alright.

Disclaimer: I have occupied the Green Room at several insalubrious venues with these gentlemen. No similarity between events in my fiction and actual life events should be inferred. Much.

Track 14 – Aerosmith – Rats In The Cellar

More sleaze done right, a lifetime infatuation borne of a threadbare Rage video I made in Year Seven. This one’s palpably dangerous, like the band themselves were in the late ‘70s. There’s definitely a connection between Tyler’s scat and the rat-a-tat-tat of my prose.

This is some parched black comedy in the key of Patton post-Faith No More. Gun-slingin’ cinematic black comedy, no bridges left to burn? That’s my genre. Mongrel punk.

These bell-bottomed, Berlin-bred chaps perfectly nail the drug-fucked bonhomie of… well, that would be telling. We all wish we were a Lord of the Sky, right?

Politics-grappling via the medium of tunes? This was a new one to unlock in those innocent, pre-tertiary times. Marrying the idea to sketchy prose and blow-out benders? Just might have legs.

Just bury your face between two Marshall stacks and get on down. Do what comes naturally. This is the sound of Home Brewed, Vampire Bullets.

Lemmy, my only actual hero, gives you a(nother) bile-flecked workout in class politics, and an all-time bass breakdown to boot. Could we Deep Fake BoJo into the shot where Lem lands an unconvincing shot to the jowls on a Tory toff? Lemmy was an elevated master, a man for our times and sorely missed.

Dave Wyndorf, man. A lysergic prince on the downhill run to seventy and still kicking out the proverbials with reliably savage garage intent. What’s more bloody inspiring than that? Squeegee your third eye regularly, I say.

Track 21 – Zodiac Mindwarp – President of the United States of Love

Zodiac was (is?) the glam-stomp sleaze rock brain child of scabby Pommy Renaissance bloke Mark Manning. When he wasn’t penning heightened gonzo travelogues with the KLF’s Bill Drummond, Manning was dropping some filthy-culty bizarro fic, chief amongst which is my beloved Get Your Cock Out! (signed), which, now I give it a ponder, may have initially set the Home Brewed ball rolling.

If you didn’t have the TV Hits poster (let’s be honest: centrefold) of Wendy James stashed somewhere “private”, you just won’t get it. What a time to have been alive and in possession of your own personal telly to watch your Rage tapes on.

More driving tunage, the life blood of the regional Aussie. Home Brewed is, at its core, an unhinged road trip exploring the surreal inner reaches of Straya, with which I’m exceedingly intimate. That sounds worse than it probably should have. Did you know I’ve got some muso mates working on a soundtrack for the book?

Back to back driving songs, why not? When the late Lano went, he bloody well went. This one came out the first year I share-housed in Collingwood, Melbourne, where we’d wave to the smackhead who slept on our porch chaise-lounge as we headed out each morning. Some of the very best years.

Here’s the second Brendon in the list, with a tune that I discovered near the onset of the pandemic, when ascended man-child mindset kicked in and day drinking was very much in perpetual fashion. Check the lyrics, this one’s your humble correspondent’s bio in rudely concise form.

Weirdly, this was the band that first taught me that dressing like a pirate was absolutely okay. My initial pseudo-goth uncles (remember, we were sheltered out there), visions of nail polish and Black No. 1 hair dye shimmied, thwarted by the fact that that sort of business would have earned you a sound hiding.

Big cosmic themes, big psych-rock energy. Band leader Ethan Miller hailed from Comets On Fire, whose burnt-out jams were regular precursors to all sorts of mad 3066 hijinks. If I was to chose a pro-wrestling entrance theme, this would 110% be on the shortlist.

Speaking of Miller, there’s this mixtape he compiled in 2010 that featured a few of the acts on this list, including Curtis Knight, one-time Hendrix lead singer. It’s still up and it’s still downloadable. Thanks Kim Dot Com. Which is to say, the Knight track featured within, ‘Lena’, lead me to the man’s “with Zeus” album (also featuring Eddie Clarke, later Motörhead’s original ax-slinger, swings and roundabouts), and here we are. Never stop digging.

There’s this band in Home Brewed, see, and they have incredible feminine energy. Watch this space.

Track 31 – The Angels – Dogs Are Talking

This one’s probably another cancellable offence, but fucken hell they don’t make Oz rock like The Angels any more, do they? Especially with baldy guitarists anticipating Joe Satriani’s later years and willing to do that wiggly-shimmy deal while doing a shred.

Track 32 – The Dead Weather – Treat Me Like Your Mother

Cross reference with Gold, above.

It turned out that the mastermind of this lot, Chris Goss, is the spiritual godfather (and producer) of vast swathes of my very favourite acts (many on this playlist, see below for starters). Which means his influence is unparallelled. He’s from the desert. Makes sense.

There was this New Year’s morning, right, maybe fifteen years ago, where I sat on a mountain, off my gourd, dry chain lightning in panorama. Eventually the sun came up and everything clicked. Yep.

Track 36 – Church of the Cosmic Skull – Into The Skull

Still with me? Cool. Literally discovered these guys last week, and could not be more enthralled by their whole occult theatre troupe situation. It’s the Polyphonic Spree via Andrew Lloyd Weber (and a few of the naughtier bands up-list) with Nikes on, a winky throwback act leaning into all the best doom metal tropes with happy clappy verve. I love them.

Welp, there you go, then. Hopefully you discovered a few new faves, maybe you even learned a thing or two. Weirder things have happened. Thanks for reading.

GUEST PLAYLIST is a monthly column where a guest creative hacks into the Graphic Opinions mainframe and leaves his/her/their takes on the best music to create your art to. There’s nothing we can do. IT have looked into this and closed the ticket. Sorry?