REVIEW: Hellboy and the B.P.R.D. – Family Ties stands on its own! Every family has demons. Some are just more deadly than others.

Hellboy and the B.P.R.D.: 1957 – Family Ties is the first of five interconnected one-shot Hellboy comics set to finalize the 1950’s B.P.R.D. series started in December of 2014. Mike Mignola and veteran Hellboy writer Chris Roberson team up with artist Laurence Campbell and colorist Dave Stewart to tell the tale of a mother in the midst of a battle with an otherworldly houseguest. And, of course, the only one for the job is big and red.

Hellboy and the B.P.R.D.: 1957 Family Ties is published by Dark Horse and will be available for purchase on September 15th wherever comic books are sold.

Hot on the trail in search of the last missing copy of Gustav Strobl’s notorious Witchcraft & Demonology book, Hellboy and B.P.R.D. agent Susan Xiang are led to the suburbs of Dayton, Ohio, where they find themselves at the home of Gladys Stemple, a distraught housewife and mother. A voice calls from the house’s darkened interior, demanding to know who has come knocking at their door, and what follows is a descent into the madness which has slowly taken root within this poor home.

The story splits into two narratives: one following Hellboy as he investigates the house itself and another showing Xiang as she delves into the Stemple family’s past. We learn of disgruntled grandmother, having just come to live with her daughter, son-in-law, and grandson, as well as the dark presence that has taken hold over their lives ever since. And at the heart of it all: a seemingly harmless book on witchcraft and demonology, long thought lost now back in print and for sale at the low price of only 35 cents.

Family Ties has everything we’ve come to expect from a great Hellboy comic: slow-burning horror, ghoulish imagery, and, of course, a few panels of good old-fashioned Right Hand of Doom slugfest.

There are few art styles in the comic world more immediately recognizable than that of Mike Mignola, and it has become a defining feature of the Hellboy world. While every artist who has taken the helm adds their own flair, it seems some remnant of Mignola’s style never fails in finding its way into each Hellboy story.

Laurence Campbell is no exception, and he does an extraordinary job in retaining the gloomy aesthetic we have all come to know and love: a mixture of line economy coupled with moments so utterly gut-wrenching that manage to add even more dread to the already grim story. Dave Stewart has accomplished much the same with colors. Tones reflect the scenes: bright and cheery suddenly plunged into muted, gritty hues, all while leaving the telltale red of Hellboy to pop in every panel he’s in.

If you are a Hellboy fan, there is no question that you will enjoy Family Ties. If you’ve never read Hellboy in your life, this is yet another excellent starting place in a long line of excellent starting places. One need not have any knowledge of the series as a whole to fully enjoy this book, and it’s a well-rounded short story that both works on its own and has potential for further elaboration. Be warned, however: reading this will make you want to complete the entire 1950’s B.P.R.D. run.

A fantastic one-shot and a great start to the end of an iconic series. I, for one, am psyched beyond belief to read the next four.

RELATED ARTICLES:
1. REVIEW: Possessive #1 is a Romantic Comedy of Spooky Implications
2. REVIEW: Eat The Rich #1 Will Shock You Right Out of Your Seat
3. REVIEW: Nightmare in Savannah is Delightfully Devilish.
4. REVIEW: Dark Blood #2 The Hidden Costs of Kindness 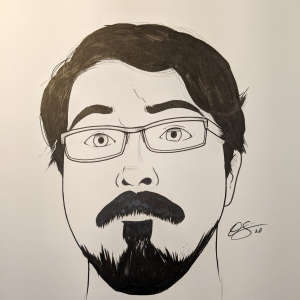 Eric graduated with a master's degree in Historical Linguistics from the University of South Carolina, where his work focused on whether Vikings and Anglo-Saxons could understand each other. Turns out the answer is "eh, probably." Now he turns ink into pocket change in the mountains of Western North Carolina with his wife and two daughters.